I hate Bitcoin Billionaire (Free) for existing. It’s an idle clicker game, where tapping the screen gets stuff that can be spent on other stuff, but I’ve spent way too much time playing this. I’ve mined way too many fake bitcoins to be proud of myself in any way. I’ve had fun, and this game provides some real excitement and does so in a way that can be played for free with innovative incentivized advertising, but again, I feel kind of ashamed about it. Genuinely, it deserves five stars for excellence at what it is, but perhaps one star out of spite for existing. 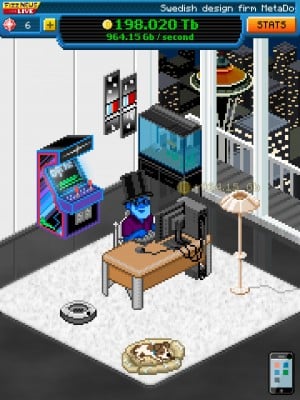 How Bitcoin Billionaire works is that it’s about mining fake bitcoins by tapping the screen rapidly to mine them. Then, those bitcoins are spent on investments which get increasingly ridiculous, going from comic books to hyperloops. As well, the miner tool can be upgraded to later levels, which mines more bitcoins per tap. And this all happens while the house the miner sits in gets more ornate and ridiculous, while they sit there tapping away at the keyboard, watching the bitcoins come in. There’s fake news that runs across the top of the screen parodying games and tech, and the silliness of you, mining bitcoins.

The clicker genre is fascinating to me, in part because it manages to distill what a game is down to a very simple set of circumstances: the challenge is literally how much you can click in order to get more of the game’s currency, which you then spend to make it faster. Most games are less blatant about this being their loops, but clickers wear it on their sleeve. They’re about satisfaction and yearning for more of it, and they don’t mask it in any way. Heck, Bitcoin Billionaire wears it on its sleeve, making its fake currency about mining (fake) bitcoins. Sadly, we probably won’t see a clicker game about mining a real cryptocurrency any time soon, at least on iOS. There was Super Doge on Google Play for a short while.

I think that the clicker genre requires a certain mindset to enjoy, the acceptance of the idea that a video game can be about the minimum requirements at all to be a ‘game’ in any way! But even then, I think I enjoy the absolute lack of barrier to entry. I can pick up Bitcoin Billionaire and play it right away. I can play it casually while watching TV, or read something on the internet while idly tapping, though the game rewards focused play through the random events and the boxes that drop in. As well, multitouch tapping is supported, so you can put some effort into getting those fake bitcoins. Perhaps it’s the utter lack of commitment that I enjoy so much that allows me to dive in completely. I feel just a bit confused by that, honestly. I know how stupid and shallow it is, but I can’t stop caring about it. 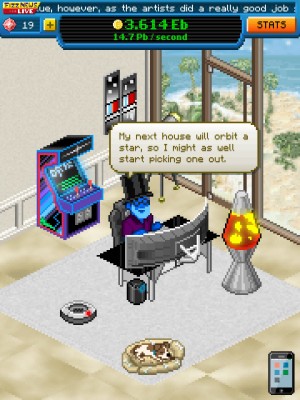 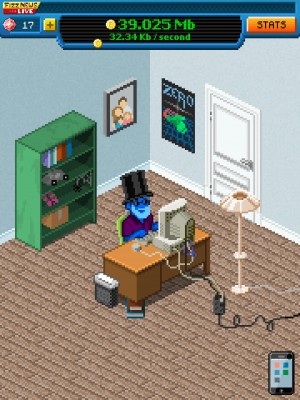 Bitcoin Billionaire is free-to-play, but is definitely a game that can be played without spending a dime or even watching a single ad, it’ll just require slower progression. There’s a two-tier currency system, but the hard currency, hyperbits, are given out for free, 25 per day. There’s incentivized video ads for a number of purposes, but there’s also incentivized banner ads, where displaying banners for a certain amount of time will grant a reward similarly to the video ads, like a coin burst based on investment earnings, or bonus tapping rates. The random events that pop up can be enhanced if positive or bypassed if negative by watching a video ad or paying 2 hyperbits.

As far as what actual money can be spent on, these include hyperbits which can be exchanged for bitcoins or supercharged boosts. There’s an Auto Miner available so you can tap and hold in order to mine bitcoins. There’s a coin doubler and a daily hyperbit doubler. You can also buy a cat for $0.99 or 50 hyperbits.

But really, the game doesn’t require spending anything on it, it’s literally only to speed up progression, which is what this game is all about. The fun is in watching the numbers get higher and buying things to make the game progress faster. The hyperbits are pretty much the only paywall of any sort, as once you run out of the daily allotment, and if you run out of ads to watch, then you’ll either have to pony up for more hyperbits or suffer the negative consequences of the random events when they happen. So if you want faster progression without setbacks, well, Noodlecake is happy to take your money. This is truly a free-to-play game, though I admit I have spent a couple of dollars on this.

Again, I’m ashamed because I know this game’s tricks, I know it’s meant to be as shallow as possible and yet I can’t stop playing. It’s amusing and well-made and I either highly recommend playing it or staying far, far away. But no matter what, I’ve got a virtual top hat, private beach, and more fake bitcoins than I know what to do with.

You may have missed

I love this game!

Pokémon GO: How Do I Connect to Let’s Go and What are Sinnoh Stones?

Disney Magic Kingdoms: How To Get Steamboat Willie and Classic Costumes